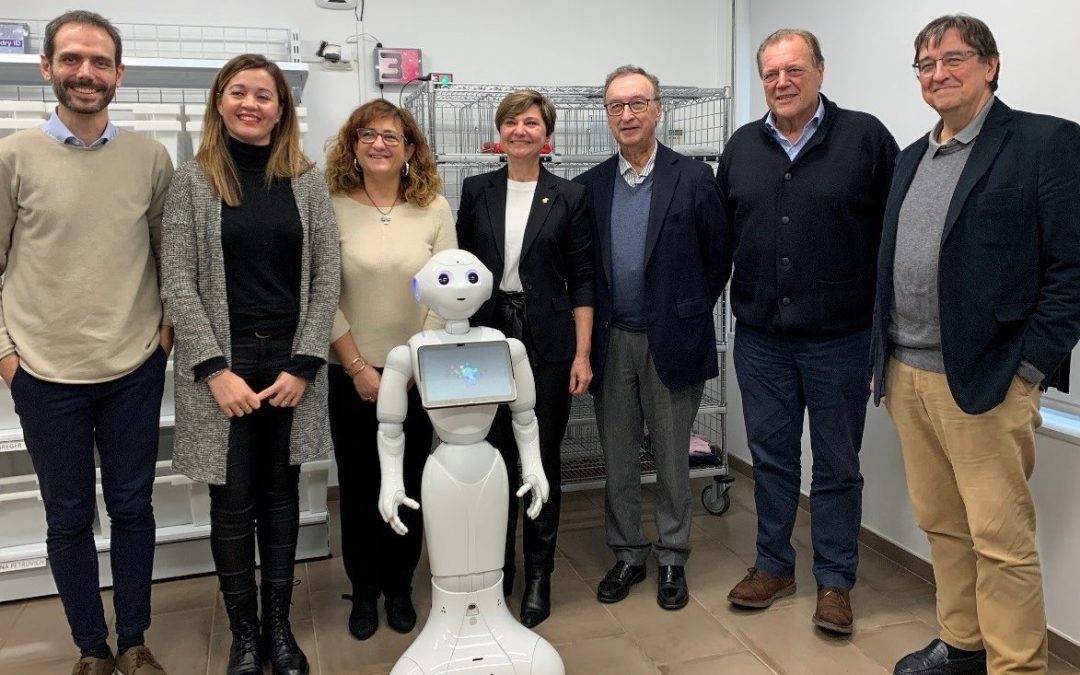 The working meeting has allowed to lay the foundations for possible future collaborations between the IRD and the municipality of Sant Pere de Ribes.

The development of the Never Alone project in the territory, a solution to the challenge of the aging of the population by guaranteeing accompaniment at home, has focused on the topics discussed during the visit.

The President of the Garraf County Council and Mayor of Ribes, Abigail Garrido, has visited the facilities of the Institute of Robotics for the Dependency, accompanied by the councilors of the town hall of Ribes, Francisca Carrasquilla, of the Elderly and Anna Herrera, of Social Services.

The needs of dependent people, who will be the majority, will force a transformation of services but also urban planning, infrastructures and mobility in cities. The data indicate that in 2051, more than half of the population in Catalonia will be 65 years or older.

The Never Alone project of the Ave María Foundation and the Robotics Institute is a platform designed to guarantee the accompaniment at home of the elderly and dependent people, making it possible for them to stay at home and guaranteeing their quality of life.

Never Alone is one of the projects that make up the PECT (Territorial Specialization and Competitiveness Projects), as part of the regional joint work strategy promoted by the Garraf County Council, in agreement with the six municipalities, and the innovation and search of the region. Their objective is to continue undertaking transversal initiatives to achieve a healthy old age and improve the quality of life of the elderly, especially those with dependency.

The Sant Pere de Ribes City Council works with different initiatives to put (technological) intelligence at the service of people and sees the possibility of deploying a branch of the Never Alone project to the population as very interesting. To make it possible, the transfer of a workspace in Ribes such as Masía Can Pau Roig, now in disuse, has been proposed.

For its part, the Institute of Robotics for the Dependency, together with the Ave María Foundation and the Garraf Tutelary Entity, have already joined forces to innovate by introducing Artificial Intelligence in their computer systems, to improve the quality of life of people .

A previous agreement with the Sant Pere de Ribes City Council has allowed an evaluation of the quality of life of the population to be started with a group of volunteers, dependents. The study will make it possible to have a quantitative indicator that allows to justify which are the most appropriate actions to undertake for the continuous improvement of the person and to know the results before and after the application of the improvements.

The first tests of these applications and the analysis of results will be carried out within this year 2020 and a great improvement is expected in the field of efficiency in the social field, since all the technicians who work in these services will have predictions, alarms and action tips to improve the areas that affect the quality of life of the people under their care.

Garrido has described the meeting as very profitable and has highly valued the contribution in social innovation of the present and future projects in which the Institute of Robotics for Dependency works and its key importance to respond to the future challenges that the aging poses.

The Never Alone project is co-financed by the European Regional Development Fund (ERDF) of the European Union in the framework of the operational program (OP) ERDF of Catalonia 2014-2020 Specialization and Territorial Competitiveness Projects (PECT) with a grant of 107,250 Euros .